Curated from among the free and paid, premium printables at the 100-plus FreePrintable.net sites, these forms, trackers, and other items were specially selected to help people request, give, and acknowledge charitable donations.
This collection of 45 printables is handy for anyone looking to track, organize, and recognize donations, whether they are giving or receiving. There are items from FreePrintableCertificates.net, FreeFaxCoverSheets.net, PrintableCashReceipts.com, PrintableFlyerTemplates.net, PrintableSigns.net, BusinessFormTemplate.com, PrintableBanners.net, and more.
This document contains a rundown of what you’ll find in this Charitable Donations Printables Pack. When both a PDF and DOC (Microsoft Word) version are available, both versions have been included. You can customize and print these items as many times as you’d like for your own personal use. This Charitable Donations Printables Pack also includes an exclusive Donation Tax Record created just for this collection.

Great for personal and organizational philanthropy, these trackers and logs help for planning which charities to donate to and where donations have already been made. There’s also a gift card for donating in someone’s name, a cover letter for a donation, a fax cover letter, and an exclusive Donation Record that tracks which donations were tax-deductible.

These receipts cover a wide variety of donations, including receipt of monetary donations, item donations, donations for auctions, equipment donation, and tithing for a church. They are great for records of both the giver and the recipient of a donation.

Acknowledge the charity of others and thank them for their donations with these printable certificates, thank you letters, and press releases.

There are several reasons why a donation cannot be accepted, including policy, lack of space, and an inundation of donations from others. The rejection letters here provide tactful wording for respectfully declining a donation. There is also a hardship letter for retracting a donation after the fact. 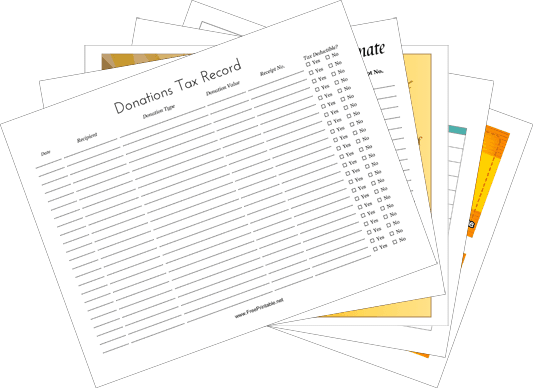